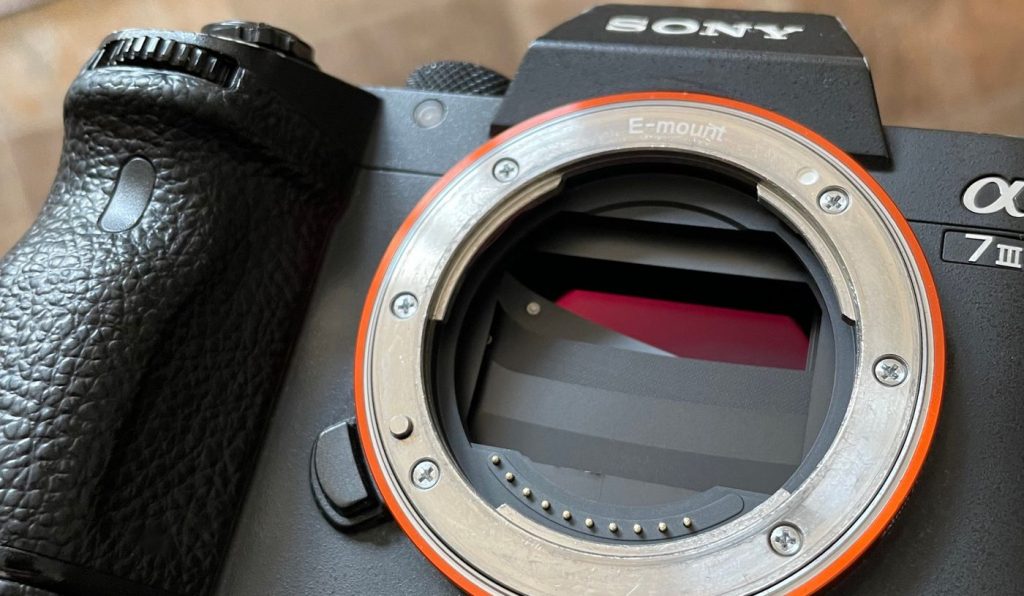 I am sometimes asked this question in the comments on YouTube. I have done quite a few reviews of various cameras. All brands that are relevant today were considered: Canon, Nikon, Sony, Panasonic, Olympus, Pentax... But I don't even want to take Sony cameras for tests anymore. Not interested. They have undermined their authority in my eyes so much that even new models do not inspire me with enthusiasm.

Why not buy a Sony camera?

In short, this is a very unfinished and crude technique with a lot of both hidden and obvious shortcomings. People order these cameras or buy from a store without trying to shoot with them and having no experience with them. This is the biggest problem. For this reason, I highly recommend everyone to look for any opportunities to take a camera for a test before buying. There are such opportunities in Kiev. I had experience with Sony A7R II, Sony A7 III, Sony A7R IV, Sony A9 II.

The bodies of the now fashionable and expensive full-frame cameras Sony A7, A9 are nothing more than slightly modified bodies from the amateur Sony NEX series. During the modification process, no one really thought about your convenience. The box was slightly inflated, the handle was slightly lengthened and voila. It's funny how they increase the size of the handle with each new model. It reminded me of how new iPhones are sold - the next model is half a centimeter larger than the previous one. But in this case, it still does not solve the ergonomic problem.

The camera can be compact and handy (eg Nikon Z6 / Z7, Canon RP), but not in the case of Sony. If you fully grip, for example, the Sony A7 III with the small and popular Tamron 28-75 f2.8, your middle and ring fingers will inevitably rub against the lens barrel. Everytime. With large G-Master lenses, it feels even more. The way out of the situation is not to take the handle completely in your hand, but to partially cover it.

The shutter / aperture wheels are extremely inconvenient. You need to look for them. They are not located right under your fingers so that it is convenient to quickly switch, as is done on Nikon / Canon cameras.

The grip is generally small and requires a lot of the battery pack. This, incidentally, also applies to Nikon mirrorless cameras. The Canon R or Panasonic S1 is most comfortable in the hand - for people with large palms and not afraid of bricks. But even Sony's bat block will not solve the problem of a rubbing middle finger (

The electronic viewfinder is the sore spot of mirrorless cameras. In the case of any Sony costing up to 4 thousand. dollars (approximate prices for A7R IV and A9 II models in early 2020) you can forget about the viewfinder. He's not working. The terrible picture quality combined with strong flicker will make you shoot only on the screen (as most do). For amateur photography, this can be tolerated, but some areas of professional work are unthinkable without a viewfinder.

The screen on the A7 series cameras is also of poor quality, but better than the viewfinder. From this screen, you can NOT correctly judge the exposure of the frame. On the screen, the photo or video may look overexposed and with highlights, while on the computer monitor everything will be fine. It is very difficult to understand where the real overexposure is, and where the screen is just bad.

In fact, it only provides hemorrhoids and problems. That's not all about the screen ... take a closer look at the photo below, don't you notice anything strange? 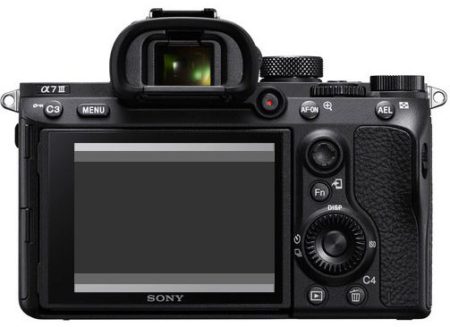 I'll give you a hint. The aspect ratio of the screen is 4: 3. Why? Riddle... The standard photo size corresponding to the matrix size is 3: 2. This means that your screen either shows a slightly close-up photo WITH CROP (crop from Sony, how is this possible?) Or in full size with black stripes on part of the screen. In the case of video shooting, you get an even smaller image on the screen. After all, the effective screen area is greatly reduced. How comfortable is it to use the same focus-picking on a low-quality screen with additional crops?  Light gray square is the original aspect ratio, gray square is the aspect ratio for photos, and dark gray is the aspect ratio for videos.

Some sonivods claim that cool guys do not look at the screen, but always carry an on-camera monitor with them. There are some nuances with connecting an on-camera monitor. First, the camera has poor quality connectors that quickly fail. Secondly, the monitor will be connected via the consumer microHDMI connector, which is not designed for frequent switching on / off of devices. Thirdly, the on-camera monitor itself is an additional bulky device with rapidly discharging batteries. Fourthly, the cherry on top - for Sony A7 cameras, when an external monitor is connected, the same fabulous eye focus is turned off.

Another nuance with the screens in Sony cameras - even with careful use, they quickly turn into this:

The menu gives the impression that it was filled in a chaotic manner in haste. They say, this is a test sample not for the masses, but now we are about to fix and arrange items of similar content in the appropriate tabs. This did not happen. And apparently not planned. How many new cameras they do not release, changing any simple function is extremely time consuming. Even if you know where to look for it. It's hard to find. The menu is not touch sensitive. Each time you need to turn the wheels long and tediously to get to the desired sub-item in a completely haphazard set of words. Often not obvious abbreviations are used. Sincere people honestly admit that it is impossible to get used to this menu (not in a month or in a year). The less sincere simply sing praises of how comfortable everything is for them and how you can get used to it in 2 hours.

Sony cameras are the least reliable devices on the market. Breakdown percentage extremely high. The quality of service is extremely low. IN some countries corny there are no service centers of this office. But people will learn about all this only after buying the next Sony A7- or sprinkled bullshit.

The inscription "made in china" when buying a Sony camera for any money should not surprise you. Despite the fact that the brand itself is Japanese. 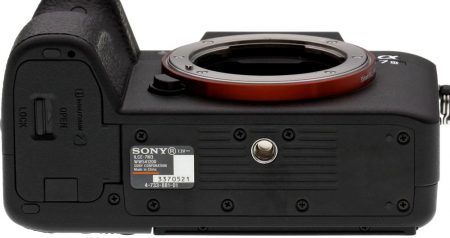 In my practice, the Sony A6400 turned into a brick when used Tamron 17-70mm f2.8. This was cured by taking out the battery, but the sudden cessation of the camera is an unpleasant thing. Showed this moment in lens overview.

5) And what about the new model?

Often people ask: okay, the old sleepyheads are lousy, but have they fixed everything in the new ones? Alas. Sony's progress is very slow. Even Sony A1 did not bother to make a screen that is normally visible in daylight.

In "blogger" Sony ZV-E10 inserted a screen with a ratio of 4:3. For shooting 16:9 video. It's just a genius move. At a6400 there was a 16:9 screen, here it was necessary to show off. But for some reason, in any reviews they do not pay attention to this. Only one headersbest camera for bloggers"…rave. Or rather, not nonsense, but purchased advertising.

Problems with quality control and frequent breakdowns have not gone away either. This office frankly spits in their customers. There are plenty of other devices on the market that do just as well. All full-frame cameras shoot +/- the same way. There are no fundamental differences. Only Sony at the same time sells you the lowest quality equipment at inflated prices.

I can tell you in more detail how ill-conceived and unprepared these cameras are, but I already have is there a video on this topic. Sony puts unfinished and raw products to market. I really don't recommend trying it on yourself. Even the newer generations of their cameras are not without the obvious shortcomings I've listed above. This is still so only from the outside, during the operation of the user there will be a lot of unpleasant surprises, which the manufacturer is silent about.

I there is an article, where I argue why Canon allegedly lags behind Sony in technology. Although why didn't Sony technology allow it to make an auxiliary screen on top of the Sony A9 II? Canon users have that luxury of buying the $ 70 Amateur 650D, the $ 9 "professional" A4500 II doesn't have that luxury. And the color rendition of the screen of the Sony A9 II is barely up to the amateur models of other brands. It is important for you to manage the shooting, it is important to see WHAT you are shooting. These are the most basic functions. If they are taken away from you, what can we talk about ...

They also tell me that I hate sony... I am listing objective facts, nothing has been thought out here. Moreover, this is only the tip of the iceberg with alpha samples... A pun came out: Sony Alpha cameras are alpha samples. This is the kind of comparison that comes to my mind when I think about the production cycle. A prototype is created, then an alpha sample, a beta sample, and then a finished product for the consumer. Sony massively sells unprepared alpha samples that overheat, glitch, have a sticky shutter or stop working altogether.

Sony A7 III owners group, for which, for one reason or another, the shutter in the camera flew.

The next question is why are they so popular and are being bought in large quantities? I wrote about this in separate article.

3 thoughts on "Why are Sony bad cameras?"