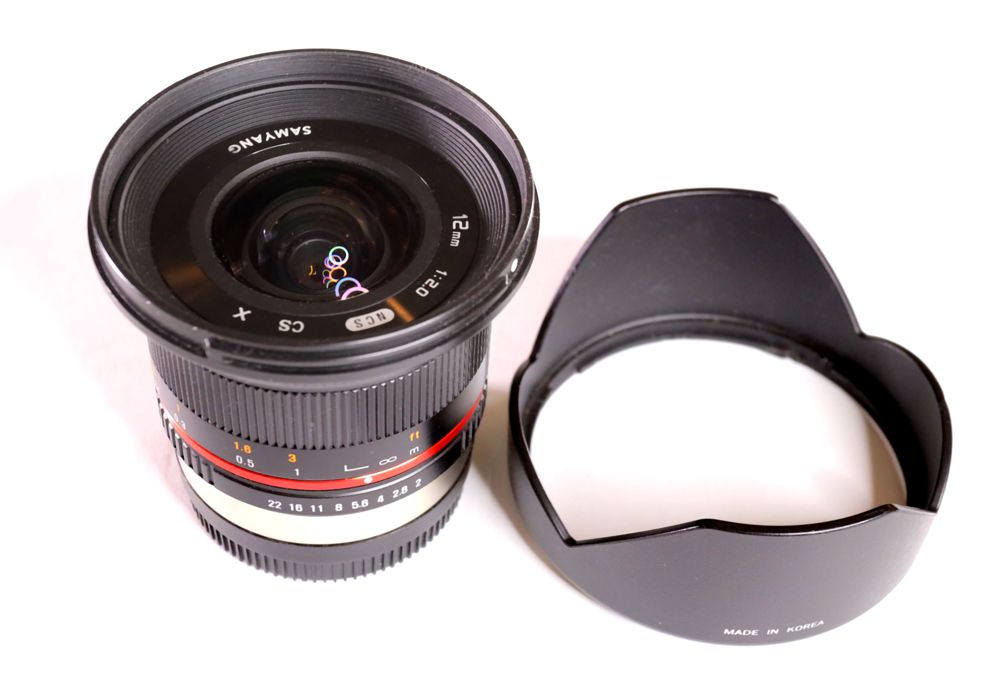 Samyang 12mm F2.0 ED AS NCS CS Is not the first lens from Samyang that I use. For many years, a full-frame Samyang 14mm f2.8... Therefore, I bought the new Samyang 12mm f2 without a shadow of doubt.

The differences between the review hero are that it is designed for mirrorless crop cameras... This is very beneficial for its size and weight. The lens is just tiny compared to its full-frame counterparts and weighs very little. Its light weight is extremely useful for shooting on a steadicam. You can run and shoot video with it all day at least - the weight allows. 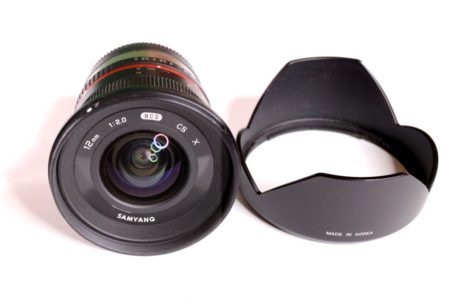 Image quality is very good... Good detail is observed already at open aperture (you can see examples and tests in the video at the end of this article). Starting at f2.8, the picture and the edges are commendable. In general, hardly anyone can blame this tiny prime lens for being out of focus.

The lens performs well in backlighting (also shown in the video at the end). You can get a drop in contrast by shooting against the sun (or other strong source) and positioning it at the edge of the frame. Shooting directly in front of the sun, the lens holds confidently.

Aperture f2.0 allows you to shoot night cityscapes directly from your hands without a tripod or fashionable (but not very useful) matrix stabilization. Also f2.0 saved me more than once when filming in rooms with practically no lighting. I shot a video by candlelight on Fuji X-T3 with this lens. But ISO, of course, I had to pull up a lot.

The disadvantage is everything 6-blade diaphragm... More expensive native lenses have 7-8 petals. This is important for optics that are likely to be used with closed holes in landscape photography. Bright light sources (sun, street lights in the evening) look nicer with more rays (will also be seen in the video).

A nice parameter is low distortion... In this regard, this lens is noticeably superior to its outdated full-frame brother. Samyang 14mm f2.8, whose distortion was just hellish. Because of her, I ended up upgrading the Samyang 14mm f2.8 to Canon 14mm f2.8L II... The latter turned out to be less sharp at open diaphragms and with terrible chromatics (also at open ones), but on the other hand it is almost completely devoid of distortion - and this is an eternal thrill. By the way, the expensive kenon also has 6 aperture blades. But back to the undeniably decent Samyang 12mm f2.0. Distortion is insignificant and, if not deliberately looked for, imperceptible. No chromatic and that's cool. By the way, full-frame samyang was also without chromatics.

Focusing is traditionally manual, which is not a problem for a focal length of 12mm. You will be using it in hyperfocal mode most of the time. With an aperture of f4 and above, anything 1 meter or more away from you will be in focus. At f2 with focus, of course, you have to work. But the grip even at f2 is large and is extremely easy to target. Moreover, modern mirrorless cameras, for which it is designed, have focus peaking.

This lens is available with mounts for Fuji, Canon, Sony, micro 4/3 mirrorless crop systems. Naturally, the crop factor will depend on the camera you install it on. In my case, this is Fuji X-T3 (previously X-T20), so the crop factor is x1.5. With Canon EF-M cameras, the crop will be x1.6, on a 4/3 mic - x2 crop, but it is primarily intended for aps-c matrices.

Focal length in terms of a full frame (in my case) comes out 18mm. How wide it is can only be felt by working with such focal points on your own. For me personally, it is very understandable and familiar, tk. I use full frame all the time Canon EF 17-40mm f4L for interior photography... Full frame 17-18mm is a very good focal length for architecture and interiors. It allows you to capture a lot of detail in the frame, but at the same time it does not give such a strong distortion as 14mm at full frame. As a rule, I try to shoot rooms with this focal point. Often there is a need for 14mm on the full frame, but whenever possible I try to use exactly 17mm, because perspective distortion on it is not yet as pronounced as at 14mm.

So what should you shoot with such a lens?

Some manage to take close-up pictures of the newlyweds. But such maneuvers must be done very carefully, because wide-angle lenses easily deform people in the corners of the frame. If you still want to shoot a person with a lens with such a focal length, place him in the center of the frame and take an even photo without blockages in full growth, then he will definitely not be offended. For group portraits I really do not advise, it's still wide.

I will add from myself - I am a fan of wide-angle optics. For me full frame 24mm - not wide angle at all. But for, let's say, an inexperienced amateur photographer, anything wider than 24-28mm is a challenge and an opportunity to easily overwhelm the horizon, ruin the composition and make a defective photo. Working with a wide angle implies having the skills to build composition, taking into account the unfolded perspective and separation of plans. In other words, if you don't want to sweat it, it's much easier to shoot with a standard kit lens. 12mm - for those who know what they want, and confidently goes to it.

Samyang 12mm f2.0 - the lens is undeniably good and worth its little money. The only question is whether you need a 12mm fix on the crop. And then I recommend watching my video review.