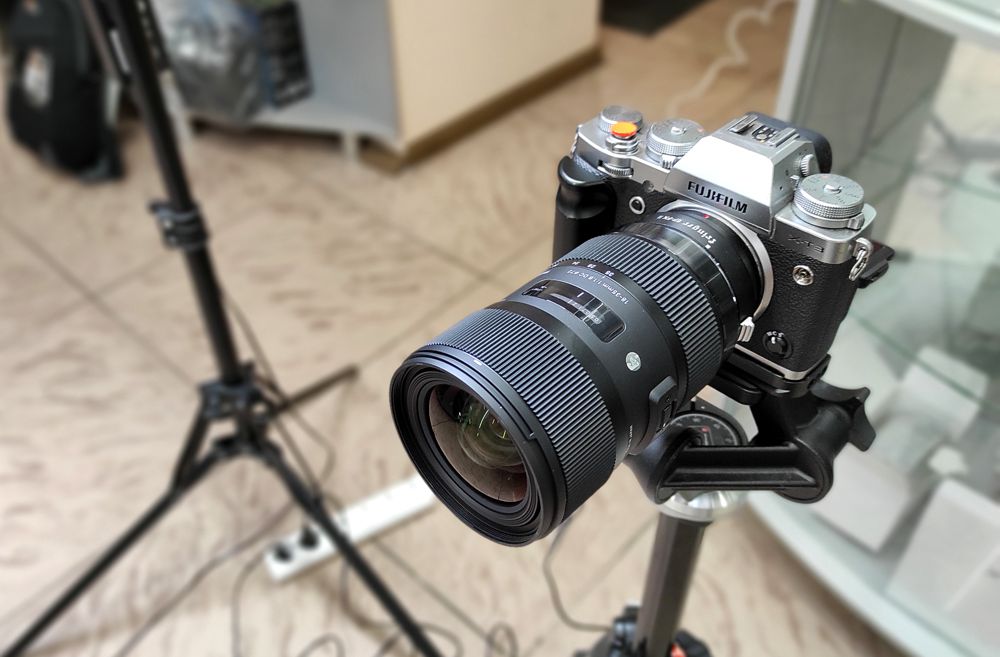 I will not hide, i don't like sigma lenses... Not as much as Sony cameras, of course, but still ...

Next, let's think about what to do with it. It weighs 810 grams, add to this an adapter for mirrorless cameras. You will get something that resembles a telephoto. At the same time, it does not zoom much. This is not the standard 18-55mm for crop cameras. The range from 18mm to 35mm can be completely replaced with one 23mm prime lens, which I highly recommend to everyone. This lens does not offer you any of the advantages of a conventional zoom lens (the ability to comfortably shoot at one point), nor the advantages of prime lenses (small size and maximum aperture). This sigma does not have an optical stabilizer and it will be problematic for you to put it on a gimbal.

Neither there nor here. But I know the reason for the popularity of such lenses. Sigmas have proven to be very sharp lenses. And everyone is chasing it. But sharpness, like the overall quality of the image, depends primarily on the lighting, and not on the lens or camera.

In 2020, Viltrox has delighted users of the Fujifilm X System with new high-aperture lenses. These are the Viltrox AF 23mm f1.4, 33mm f1.4 and 56mm f1.4 line. I checked out the 23mm version as soon as it became available for purchase.

The problem with the Fujifilm X-mount crop system is that the line of native optics is quite expensive and, in my opinion, is clearly overrated by the manufacturer. Prior to the release of this line from Viltrox, users of the system had a choice to wear adapters and non-native optics or go broke on the native Fujifilm.

By the way, the Viltrox lenses already exist for the system Canon EF-M.

This is an autofocus lens weighing 260g in a tightly assembled sturdy metal body. It looks stylish, feels in the hands - I'm not afraid of this word - premium. The included metal hood is a luxury even for native optics from many manufacturers.

It has the same manual aperture ring as native lenses. Minus - no clicks when rotating, value change f-stop happens as in video optics.

The lens is average in size. As for a full frame lens at f1.4, it's just tiny. As for a lens for a small camera, it is rather big, but also not huge. Its weight does not burden, although in the background XC 15-45mm f3.5-5.6 certainly not easy. Everything is relative. 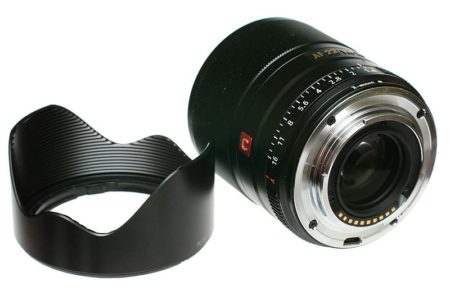 Center Viltrox 23mm f1.4 is sharp at all times. The edges suffer from unsharpness up to about f4. At f5.6, detail is excellent across the entire frame.

I do not recommend shooting group portraits with this lens at apertures up to f4 - people around the edges will suffer from blur.

Chromatic aberration is present at open aperture. We close the aperture a little and they disappear - a classic of the genre. Quite normal behavior for an f1.4 lens. There is no such perfectionism that lenses give SigmaART on the open. But there is also no characteristic glow inherent Canon EF 50mm f1.4 on the same open f1.4.

If compare it to Canon EF 35mm f2 IS (and this full-frame lens has the same field of view and equivalent aperture), Canon's 35k optical quality will leave no stone unturned from Viltrox. But do not be upset, because with the native Fujinon 23mm f1.4 these lenses go side by side. 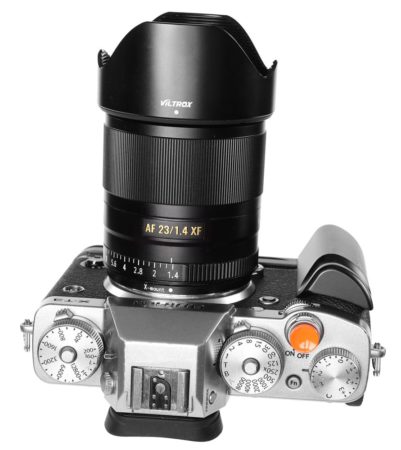 The lens with a focal length of 23mm is not the best possible lens. But the aperture f1.4 when shooting at a distance of up to 1 meter allows you to quite well separate the subject from the background. The nature of the bokeh is ambiguous and depends on the shooting distance. If the bokeh is strong - if you are shooting something or anyone large enough - then the drawing is pleasing. But if the bokeh is not very pronounced - that is, when shooting from a distance of 1.5 meters - the bokeh looks ragged and unpleasant.

The Viltrox 23mm f1.4 lens is equipped with a stepper motor (STM) focusing motor. This means that it focuses smoothly (as much as possible on Fuji) and fast (no problem with that). Autofocus is silent, unlike Fujinon 23mm f1.4, which is inferior to this lens not only in autofocusing mechanism, but also in design.

The lens has some optical flaws that can be more forgiven, given the cost of $ 300. or about 1/3 of the price of the native Fujinon 23mm f1.4, which is also not devoid of flaws and not to say that it is clearly superior to Viltrox optically. But in terms of constructiveness and autofocus, the native lens is straightforward to merge with the new Chinese competitor. 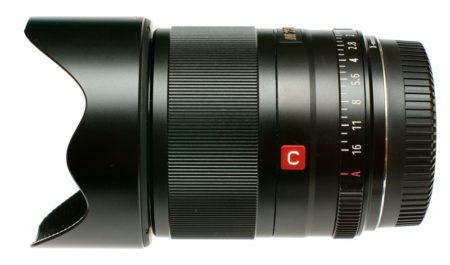 Overall I'm happy with this lens. It is pleasant to take it in hand, it looks beautiful on a carcass and removes it decently. I appreciate the aesthetics of Fujifilm cameras, this lens does not spoil it, but successfully complements it. Plus, it is a highly functional prime lens for all occasions. The combination of a versatile focal length and good aperture makes it the main camera for my Fujifilm X T3... This is a lens that can be used 80% of the time on the camera and you will not feel discomfort in any conditions - whether it is evening shooting, shooting in a tight room, landscape photography or even wedding.

23mm cropped or 35mm full-frame equivalent - a very useful and comfortable focal length for a wide range of tasks. The lens focuses confidently on photos and video, and in general not so bad optically. I can recommend to everyone in a row for everything :)

An overview of the entire current Viltrox line for Fujifilm. 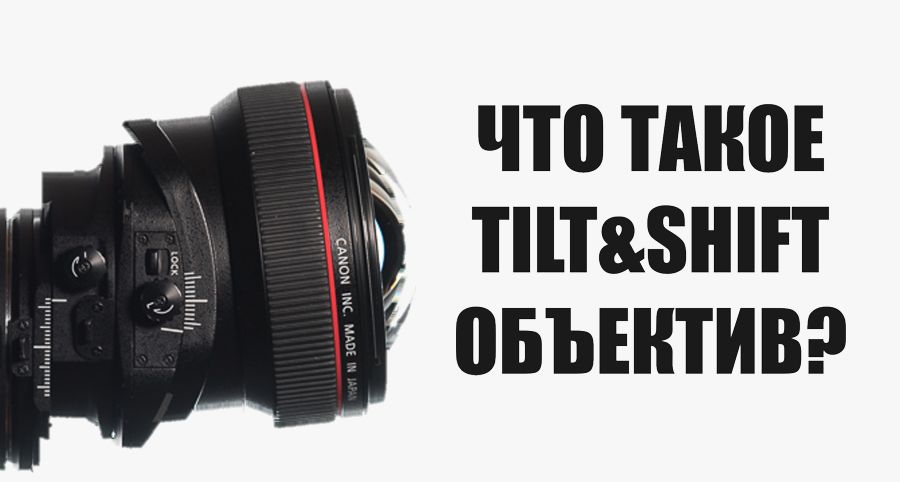 I thought about buying a tilt-shift lens when I decided to upgrade Samyang 14mm f2.8. After all, interior photography - one of the areas of commercial photography where the use of tilt-shift optics makes sense. I met one friend, tried the Canon TS-E 24mm f3.5L II and realized that for my practical tasks, buying such glass would be unjustified and excessive. Instead of tilt-shift I bought a Canon 14mm f2.8L II.

What are tilt and shift lenses?

These lenses allow you to tilt or shift the optical focusing plane. In other words, you can move the lenses inside the lens relative to your camera's sensor. The displacement takes place using small latches on the lens barrel.

The design of such lenses is traditionally complex. They have a lot of optical elements and, in addition to them, a complex mechanism of rotation and fixation of optics in different planes is implemented. 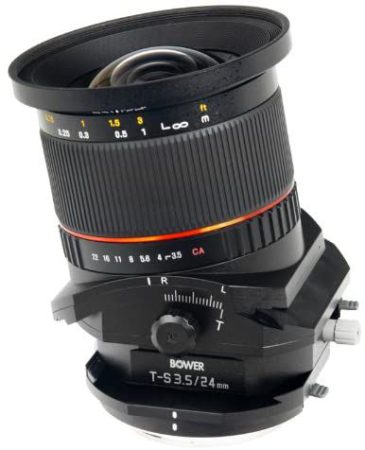 In addition to this, such optics are usually intended for use on full-frame cameras, but in fact covers the area of ​​the medium format matrix. This is because the optics have to cover a much larger area to be able to bias than in normal use.

Why are there such difficulties?

Here we come to the most important thing, because tilt-shift lenses cost an average of 1500-2000 dollars and do not have either zooming or autofocus. Why do you need such lenses?

It all boils down to two things:

Optical axis tilt allows you to change the focusing plane. 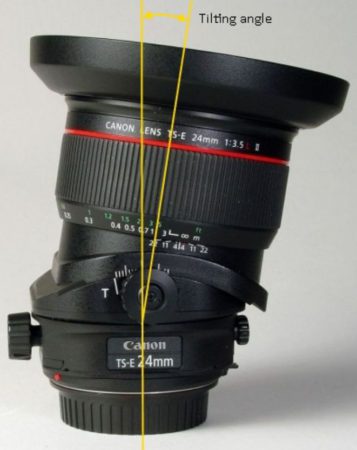 With conventional lenses, we are used to the fact that for two or more objects to be in the field of focus, they must be at the same distance from the camera. A classic example, if you put bottles in a row and put them at an angle to the camera, then the nearest bottle will be sharp (if we focus on it), and all subsequent ones will go out of focus as we move away from the camera. If you move the optical axis of the tilt-shift lens to the desired angle, then you can make all the bottles sharp in such a photo. 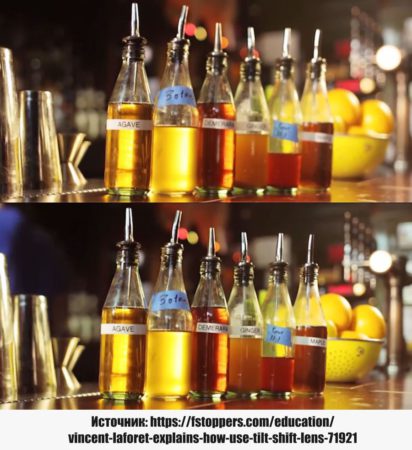 What exactly should be the position of the lens relative to the object being shot describes Scheimpflug principle or this effect is achieved by a scientific poke method. One way or another, you must understand that for this the camera is mounted on a tripod and it takes time.

Such a technique is used in subject photography: for jewelry, photography of food (food shooting), beauty filming.

Optical axis shift (shift) allows you to align the perspective of the frame. 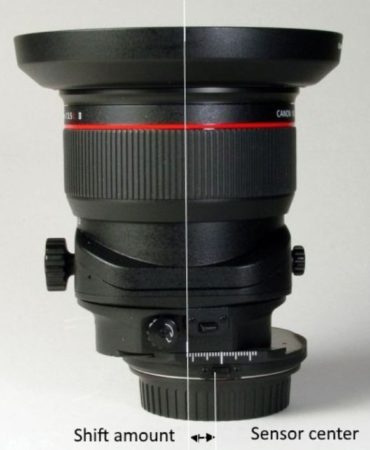 When the optical axis is shifted, the lens remains at its normal angle to the camera, but moves away from the camera. This is how it looks mechanically. The effect you get is shifting the entire image in the viewfinder.
A classic use case: the camera is aimed at a building at a right angle. You get smooth, not overwhelmed, walls, but in the frame you see only its lower part. Then on the lens you turn the lever responsible for the shift (shift) the lens rises relative to the camera, and in the viewfinder you see the whole building and without the usual blockages. 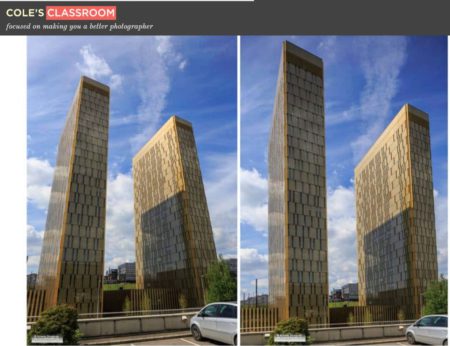 With a conventional lens, in order to capture an entire building from the same point, you would need to tilt the camera and look up. This would inevitably lead to a blockage of the perspective of the image. The shift function allows you to place the camera at a right angle to a building, shift the lens relative to the camera sensor and get an even perspective.

It is used in architectural and interior photography. A similar effect can be obtained programmatically, but naturally with some losses.

But that's not all. Tilt-shift lenses can still be rotated around their axis. If you hold the optical shift (shift) in the horizontal plane, then you get a convenient tool for stitching panoramas. It looks like this: the camera is mounted on a tripod (this is the only way to work with tilt-shifts) and a series of frames is taken with the lens shifted to the left and right from the center of the image (it is also possible vertically, but it is used less often). This panorama is then stitched together into one image and you get a medium format photo using your full frame camera.

It is applied in architectural, interior, landscape and also subject photography.

When talking about commercial shooting using tilt-shift lenses, you need to add before the name of each direction hi-end.

This level of meticulousness in the filming process can be justified:

a) large fees for each photo
b) your enthusiasm for amateur photography.

For ordinary orders in the same directions, there are much simpler ways to achieve similar results. The perspective in real estate photography is leveled by software, a greater depth of field in subject photography is provided by wider focal lengths in conjunction with image cropping or focus stacking. Tilt-shift allows you to get high-resolution and detailed images, where it is required - a question, because 99% of modern commercial filming is done for the purpose of publishing photos on the Internet. And where large-format printing is needed, software methods of photo processing are already enough. But then again, this can be justified in hi-end photography for global brands.

In the video below, I will talk about the principle of tilt-shift lenses, their areas of application, and also consider most of the current models of such optics.