Canon EOS M50 (aka Canon EOS Kiss M) - a very popular camera both here and in Japan. This is a compact camera with an APS-C sensor that allows you to shoot in various conditions. This article will discuss the choice of optics for this tiny carcass.

One of the advantages of Canon cameras is the widest choice of optics at very affordable prices.

Cameras Canon M50, M6 Mark II, M100, M200 and others from the M series have an EF-M mount. This mount is designed to work with mirrorless crop optics. For other lenses you will need adapters.

The "native" lenses for these cameras will be the following models:

Compact full-time (whale) lens. Suitable for a wide range of tasks. In low light, again, a tripod will be required.

Universal super zoom. Very close/far away. Traveling will be an interesting option. Please note that this is one of the "dark" lenses with low aperture. Will work well in bright sunny weather. Practically unsuitable for evening shooting.

Compact TV. With such a lens, you can shoot birds, bring distant objects closer. Also dark.

Super-compact high-aperture standard prime lens. With this lens, you can shoot handheld even in the evening. Aperture f2 is very good. But there is no zoom, that's how physics works.

Macro lens with built-in illumination. With it, it will be possible to take interesting shots in very close-up.

Standard Super Fast fixed lens. Almost analogue 50mm f1.8 at full frame. With f1.4, you can shoot in almost any light. 32mm f1.4 will allow you to shoot half-length portraits with some background blur.

I also recommend Hoya protective filters for your optics: http://alii.pub/6380xs

It is worth saying that all these lenses are optically very worthy. The choice depends on the nature of the use.

But keep in mind that this is not an exhaustive list of lenses that can be used on Canon M cameras.

You can also purchase any of Viltrox lenses (available for various mounts, including Canon EF-M). Or adapt Canon EF SLR lenses via simple adapter or speedbooster. At the same time, all functionality and autofocus will be preserved.

Watch my videos on this topic: 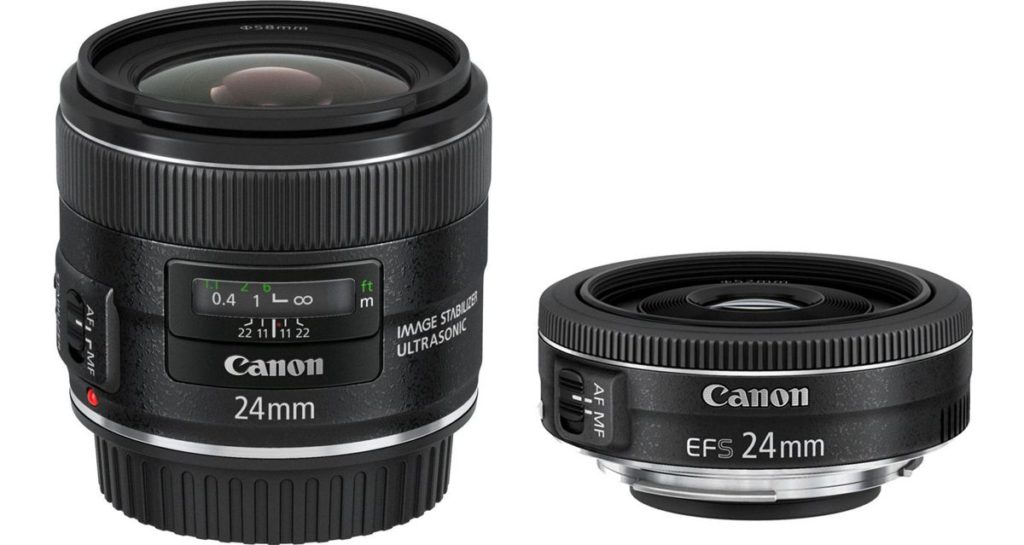 I am often asked questions about these two lenses at my Youtube channel... Both lenses are good, but in their own way.

Canon EF 24mm f / 2.8 IS USM - Canon full frame lens that can be used with both full frame cameras and crop cameras

Canon EF-S 24mm f / 2.8 STM - Canon crop lens, which on SLR models will be mounted ONLY on crop cameras. You can put on mirrorless carcasses through an adapter and on full-frame cameras (RP, R, R6, R5), but they will take pictures only in crop mode and with a reduced resolution. It can also be mounted via an adapter to mirrorless crop cameras on the EOS M. But only with adapter.

Outwardly, both lenses are very compact and lightweight, you will not feel their presence in terms of weight and size. But the pancake EF-S 24mm f2.8 STM is even smaller.

Optically, both lenses are virtually flawless. They are sharp from edge to edge starting at f2.8. That is, you only need to close the aperture on such optics to control the depth of field. Detail is excellent at any aperture setting (as long as the aperture does not separate you from detail).

An important point. No other lens will give you tangible background blur... Forget about portraits with these focal lengths and apertures.

Among the differences described above, the most important is that Canon EF-S 24mm f / 2.8 STM designed for crop cameras... In fact, according to the field of view, this is a standard lens. It has an equivalent focal length of about 39mm, which cannot be called a very wide angle.

Lens Canon EF 24mm f / 2.8 IS USM on a full-frame camera it will give full-frame 24mm - this is already the territory of wide-angle cameras. I personally find this focal point boring, but nevertheless, it is suitable for landscape photography and many other tasks.

Which lens should you buy?

I don't see much point in buying a Canon EF 24mm f / 2.8 IS USM with a crop camera. But in the full frame, you get a very high quality compact wide-angle lens.

In 2012, Canon released the Canon EF 24mm f / 2.8 IS USM, Canon EF 28mm f / 2.8 IS USM and Canon EF 35mm f / 2 IS USM series. Lenses were produced specifically for digital cameras, taking into account the large number of megapixels and the increased requirements of amateur photographers. They have older counterparts, but today I would recommend choosing from this series. Believe me new RF optics no better (except marketing) compared to these "oldies".

All of these lenses are excellent optically. The only question is in the choice of the parameters of aperture and focal length. I have used for a long time Canon EF 35mm f / 2 IS USM and I think it is the most interesting of this line (and he gives bokeshku, unlike the heroes of the review). But if you want a compact, lightweight and super-sharp full-frame width, the Canon EF 24mm f / 2.8 IS USM is a great option.

The cost of lenses from the review 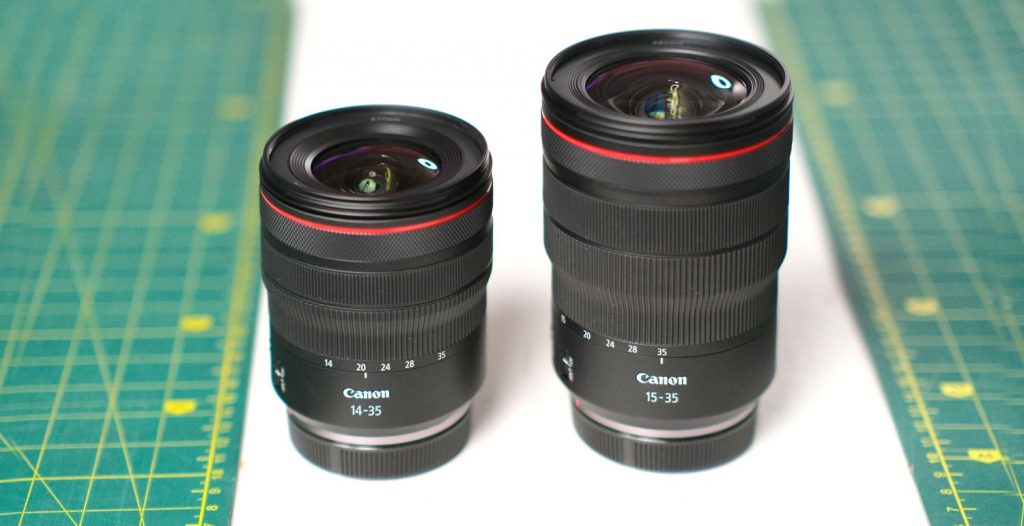 Weight (about 500 grams) and dimensions are comparable to RF 85mm f2 IS... This is great because similar lenses weigh 800 grams on average. The lens has elements and coatings to control all kinds of aberrations. In general, before us is an elka with an excellent picture.

The lens has been on sale since August 2021.

For the price, Canon EF 16-35mm f4 is still much more attractive, because it is much cheaper, but without 14mm at wide angle or Sigma 14-24mm f2.8, but without 35mm at a long angle ... so the lens is interesting and unique in its own way.