First of all, I will tell you why a specific power of a studio light unit is needed. Then I will go over the technical features of these particular models from Godox. I've been using them for years, so I have a lot to say.

Where is a 60W source useful?

For shooting in a small room from a short distance, there is no point in a higher power source of constant light.

An example - if you are a streamer and shoot yourself at the monitor, then there will be plenty of such power of key light above you. A more powerful source will blind you strongly in the eyes and this is not necessary.

If the source is used not as a drawing source, but as a backlight or modeling source, in a small room, then even 60W will be a lot. The backlight / modeling light is set to 1/5 - 1/10 of the power of the main key light. In addition, for backlight, you can use a source without a modifier, which gives more headroom.

Regarding modifiers, if you have a standard softbox/octabox up to 90cm or an umbrella, then for shooting one person waist-deep from a short distance, 60W will be enough.

Therefore, 60-watt light covers a fairly wide range of blogging tasks and more. Although in general, these are the most low-power sources among studio units.

1) Suitable for full-fledged work in studios with an area of ​​​​about 40 sq.m.
2) You can use modifiers with greater light loss (with honeycombs, large sizes)
3) It is more convenient to use with other light available, easier in terms of light isolation
4) It is easier to achieve light contrast relative to the background

The first thing to consider when choosing a light source is room dimensionswhere it will be used. A 150W constant light source will allow you to use larger diameter modifiers and thus illuminate a larger area. While for small rooms this is not necessary and excessive.

The next nuance - high power allows easier to work with honeycombs. The use of honeycombs absorbs about half the power of the source.

The large power of the device allows you to freely use more complex lighting schemeswhere the light source is at an angle and does not shine directly, thus losing power.

On light insulation. Working with constant light always implies light isolation. But the more powerful your source, the more tolerances you can afford. Also, with a 150W source, it will be easier for you to achieve the effect of a darkened background (possible with RGB backlight) relative to the foreground.

In general, a 150W source gives more options. But these features will be needed for advanced work with light. If the task is just to highlight yourself and not bother, then you can get by with a 60-watt source. But when working in a studio, when there is room for maneuver and there are a lot of light sources, then of course it is better to have a power reserve.

When are even more powerful sources needed? (300W or more)

If the task is to shoot a group of people in a large room, the power will go to kilowatts.
If you need to shoot slow-motion with large objects in the frame. If you are shooting a small subject in slow-motion, then you can get by with 150 watts, because. the source will be close enough. The further you need to put the light, the more powerful it should be.

For video filming of a person in full growth on a white cyclorama, which needs to be filled with light, increased power is also needed.

One way or another, a power of 300 watts and above already belongs to highly professional use. For small spaces and relatively simple projects, it is clearly overkill.

The Godox SL60 has a cooling heatsink right around the LED bulb and the heat is dissipated inside the reflector you put on this unit. 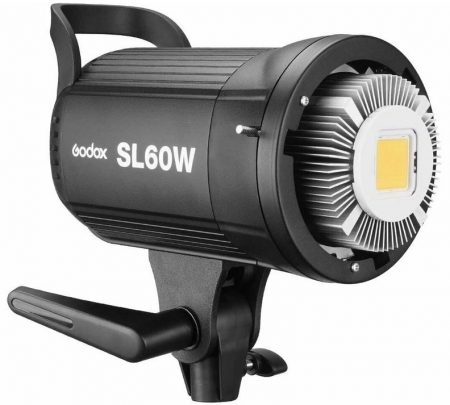 In most cases, this does not affect anything. But to use optical snout or ordinary snoot will be problematic. At full power, overheating occurs very quickly. I have a Colbor CL100 for this task, where the cooling system is in the housing, and not around the lamp.

In general, the permanent light Godox SL60 is made of high quality: a good fastening made of strong plastic, nothing creaks and has not broken in 3 years of use (unlike the aforementioned Colbor CL100, which 2 months later barely keeps on the rack). Godox SL60 is a good thing for the money.

As for the Godox SL150 II, it costs more and you immediately feel what you paid more for. The mount is already metal, plus the arched design of the rack mount itself is more convenient. 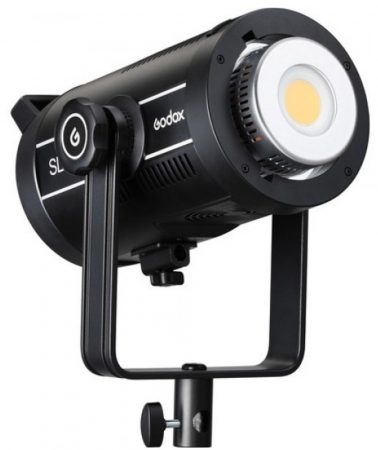 Choosing between first version SL150 and second SL150 II, I definitely recommend the second version. The first SL150 features a very noisy cooling fan that will interfere with audio recording. The second version of Godox SL150 II works quietly and is generally made of better quality in terms of design.

By the way, the Godox SL150 II has a cooling system located inside the case, so you can freely use attachments like optical snout.

I also recommend this article: constant light vs pulsed light

I will share my thoughts on the topic of photo bags. I had bags of different brands (Manfrotto, Loewepro, Arsenal, noname) and various sizes. I think the best option is to go to a photo store with your equipment and pick up a bag there specifically for your tasks. I used to do that.

First you need to decide exactly what set of equipment you will carry with you.

For a working photo bag I have this:

For a travel photo bag, I have this:

My approach is that the size of the bag should be optimal. Your set of equipment should fit in the bag personally, but it should not be empty. Therefore, to select the optimal model, as well as with clothes, it is better to go and try on a thing for yourself. 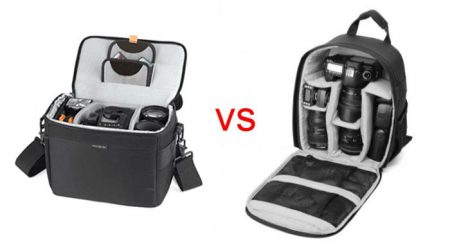 The solution is ambiguous. It depends on what you want to do with your equipment. If you want to go long and far with a weighty set of equipment, then a photo backpack will be more convenient. The backpack evenly distributes the weight on the shoulders, so if you carry something heavy for a long time, of course the backpack is more comfortable. But getting equipment out of a backpack is not at all as convenient as from a bag that is always at hand.

My logic is this - if I take a camera with me, it means that I will use it, and not just wear it. That's why I prefer photo bags. And if I have to walk around with equipment for a long time, then instead of carrying a heavy backpack with a heavy camera and lenses, I prefer to take a compact bag with a light set of equipment. For this reason, for traveling to me personally crop mirrorless impress more.

Photo backpack I also have it, I store lenses in it and generally do not take it out of the house.

So which bag should you choose?

Recently I broke my principle and I ordered a photo bag from AliExpress. 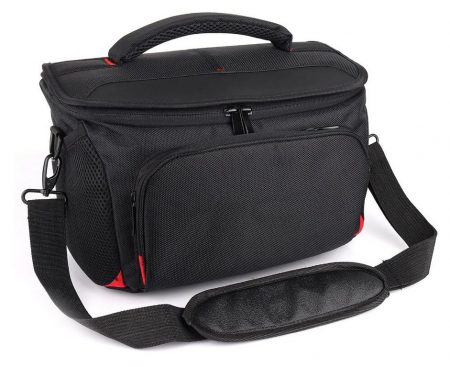 Before settling on this particular model, I looked at a lot of other options. A common problem is that most bags are too small to fit my #1 set.

This bag I ordered with a share of risk, because. did not know what it would be in reality. The mention of the size in centimeters in the description helped to decide. I chose the largest possible size ... and did not lose.

In my video review, I showed the real capacity of an inexpensive photo bag with aliexpress. The quality of the materials is quite normal. Cons: The zipper doesn't work as smoothly as on my previous Manfrotto bag. Nevertheless, I was generally satisfied and can recommend this model to others.

Other goodies from AliExpress

It is a white cube of translucent material with one open side. The walls of the lightcube scatter the light coming from the outside in order to evenly illuminate a small object inside.

Lightboxes are standard and with ready-made lighting.

regular lightbox requires additional lighting, by itself it is ineffective. On the other hand, for more experienced photographers, it gives more options and flexibility when working with lighting. 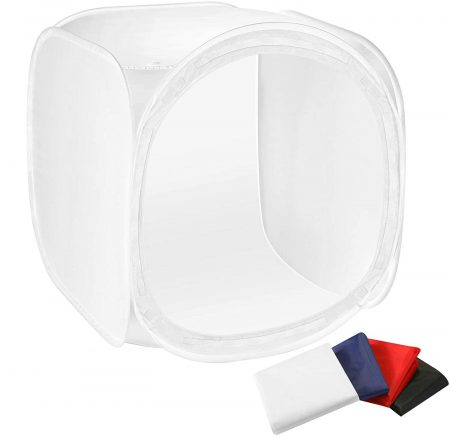 Lightboxes with LED illumination convenient in that you immediately see the finished result and you can use them even with a phone, without buying a camera. At the same time, it should be borne in mind that the built-in backlight from such photo boxes is rather weak, and it would be better to put the camera / phone on tripod. 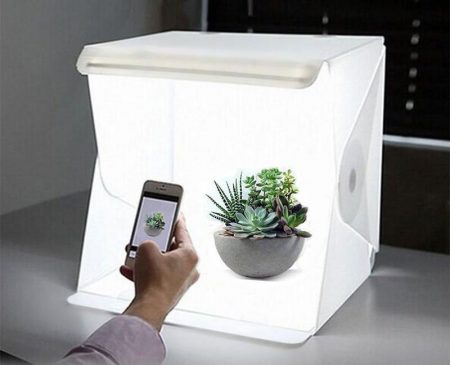 Other characteristics of lightboxes.

As a rule, photoboxes are designed for photographing small objects. If you need to remove a large object, you need to go to the photo studio and work on a white cyclorama.

Lightbox sizes are divided into categories from 20cm to 40cm и over 60cm. When choosing a photo box, consider the width, height, and depth of the subject you want to shoot. The object should not be located close to the walls.

How to highlight a lightbox is a vast topic. The correct professional approach is to use studio flash sources. On-camera ones are also possible, but in any case, pulsed light is preferable. Flashes provide more power and allow you to work at smaller apertures.

Also keep in mind that it is better to shine with diffused light. If you have a studio monoblock or вспышка, it will be necessary to him buy softbox. The walls of the lightcube scatter light, but if your source is hard, the walls of the photobox alone will not be enough.

For beginners constant light more understandable and simple, because it is immediately visible.

If you choose a constant light source, then I would recommend staying at ring lamp. This is the easiest and most convenient option. It does not need to be further softened. Some models of lightcubes immediately come with remote lamps in the kit, but the quality of such lamps usually leaves much to be desired.

On the topic of choosing a constant / pulsed light, I have A separate article.

The size of the selected lightcube will affect its portability. As a rule, these are quite compact devices. The classic light cube without illumination in the assembled state can even be put in your pocket. Backlit photocubes have a more rigid frame and, accordingly, take up more space.

There are models with hard plastic walls, and there are soft fabric ones. Lightboxes are made from both synthetics and cotton. Made of cotton, these are usually larger models. Cotton is preferable, because. less glare.

Also, photocubes are usually supplied with several colored backgrounds (red, blue, black). But the most popular is the white background.

The cost of a photobox will depend on its size and the presence / absence of backlighting.

Another important factor is where you buy the lightbox. In online stores, margins for such goods are maximum. If you want to save money, save yourself from intermediaries and directly buy lightbox on AliExpress.

I mentioned the pros at the beginning. They are easy to use and cover simple product photography tasks for online stores.

The downside is that if you want to shoot a complex subject (glare, transparent, white objects), then a lightbox might not help. Shooting the above objects requires complex lighting schemes that are not implemented in photocubes. An example of such a shoot I described in this video.

Lightboxes are suitable for streaming simple objects. If the objects are matte, compact, dark, uniform, then a lightbox will be a good solution. For beginners, buying a photocube for subject shooting is a really good choice.

To work in a lightcube, it will be good to buy a macro lens. If you have crop mirrorless, then I recommend this inexpensive model.